There is an earthquake happening. Tectonic plates are shifting and the Old Ones want to keep it all intact, all in place. The lava of change is flowing; the universe has heard the call and it is moving forward. And it is a wave, a giant wave of upheaval and light: a black becoming white, or yellow, or purple.

And in the great discomfort is the change. There are molecules forming and reforming in new patterns, new habits. And in the discomfort is a new way of being. A voice that says “it is no longer the same. It is a different story now.”

Triggers and warnings and lightning storms that flash.

Who is that woman coming out of her cave? On hands and knees she crawls, in fits and starts, like a great beast, she lumbers out onto the steppes. Face streaked in mud, she raises her head to the sky. It has been so long it hurts her eyes. So long that she has been squeezed, she is not even certain she can stand.

And the earth rumbles and quakes, and tumbles her to her face. For a moment she stills, but then she breathes, and breathes again, and rises up once more. There is pain as she stretches, limbs that have not moved this way in eons. They crackle and snap, but she pushes up on one arm and then the other, and comes up to her knees. Her spine cracks as it straightens and her head feels unbalanced on her shoulders.

The sky explodes and thunder rumbles, and a bolt of lighting spears her side, singeing her as it hits the ground. She falls to her face once more. She notices how quickly her hands grab the earth, happy to be there once again; her spine bending back into its curve so easily. And it would be so easy, so very, very easy, to crawl back into that cave once more. To close her eyes and curl up once more.

It is too late now… She has raised her head… She has seen the sun… There is no going back.

Marianne Simon was born to a family of artists and has spent her life working with the performing and creative arts. She was also inspired to work with the earth and founded her landscape design company, Poetic Plantings, with the vision of creating gardens that would nurture the spirit and nourish the earth. Beasts of Change is part of a collection of poems she just published called “Skins I Have Worn.” You can visit her at http://www.skinsihaveworn.com. 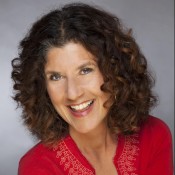 This author has not filled out their Sistership Circle Author Bio.

Being Present and Compassionate